The Sailor Smokes A Salmon*

*or at least part of a salmon

With the return of the cool weather (lows of -17 degC) I thought it was time to get my smoker smoking.  I’ve owned my present smoker for about 2 1/2 years but have never smoked fish so here goes.

Both Sailor Girl and myself love smoked salmon (even the cabin rats love smoked salmon) but most smoked salmon has a sugary coating on it; definitely not something low carbers like us want.  This will be the first in a series of low carb smoked salmon recipes I plan on developing over the next month.  The first one I will be doing is cold smoked  salmon, it will be almost a Lox but will have a light smoke on it.  In the future I plan on doing other cold smoked recipes, some hot smoked ones and even a salmon candy recipe (all low carb).  For those of you that are scared of the health benefits of a low carb lifestyle I will also present you with a full sugar option as well.

On to the preparation!

Obtain a salmon fillet.  I’ve used an Atlantic salmon fillet for this recipe.  Once I have this down I plan on using Sockeye in the future.

It is very important to keep the salmon as cool as possible to prevent the growth of microbes.  Work quickly on the steps and return the fillet to the refrigerator.

Dry the fillet with paper towels; Mrs Sailor would frown if I used a tea towel for this step.

Put a layer (3/4 cm) of Kosher Salt in the bottom of a tub that is large enough to lay the fillet flat.

Lay the salmon on top of the salt, skin side down if it has skin. 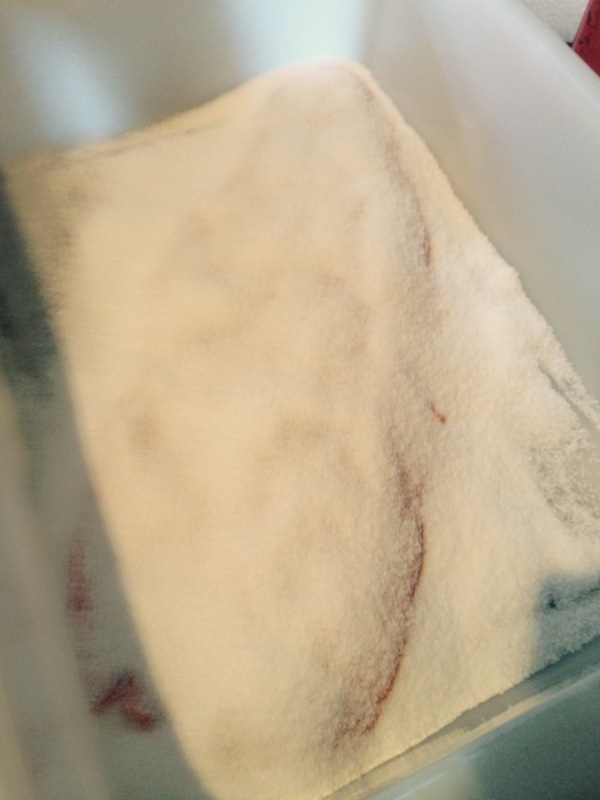 Cover the salmon with a layer of salt; cover and refridgerate for 12 to 14 hours.

After 13 hours of dry brining.  Looks like I could have cut back on the salt!

Now wash the salt from the salmon with cold running water and rinse the salt out of the container.

Place the salmon back into the container and cover with cold water, about half full. 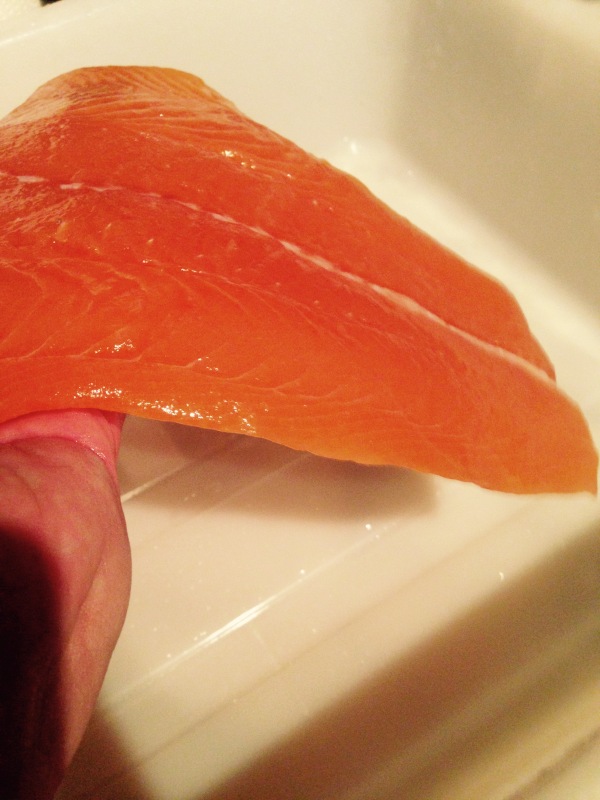 Notice how the fillet has stiffened up after brining and the colour has changed before soaking in the fresh water.

Return to the refridgerator overnight or about 12 hours. DO NOT cover the pan, this is an important step as the surface of fillet must dry.

As the fish dries it forms a pellicle (a shiny, somewhat tacky surface).  The pellicle seals the fish keeping moisture in and also seems to take the smoke better.

I will be using alder wood for the smoke (a very traditional salmon smoke) and I will let the salmon smoke about 2 hours.  As I mentioned above this recipe is meant to be more of a lox with a light smoke.

Well it is the middle of the night so time for some sleep before the smoke begins.

Well just like I hoped, it is a cool morning, perfect for cold smoking (hopefully not frozen smoking!).

For this smoke I will be using my A-MAZE-N cold smoke generator.  This is a great product that I have been using to smoke cheese and add extra smoke to my other smoking projects.  Check them out they work great! 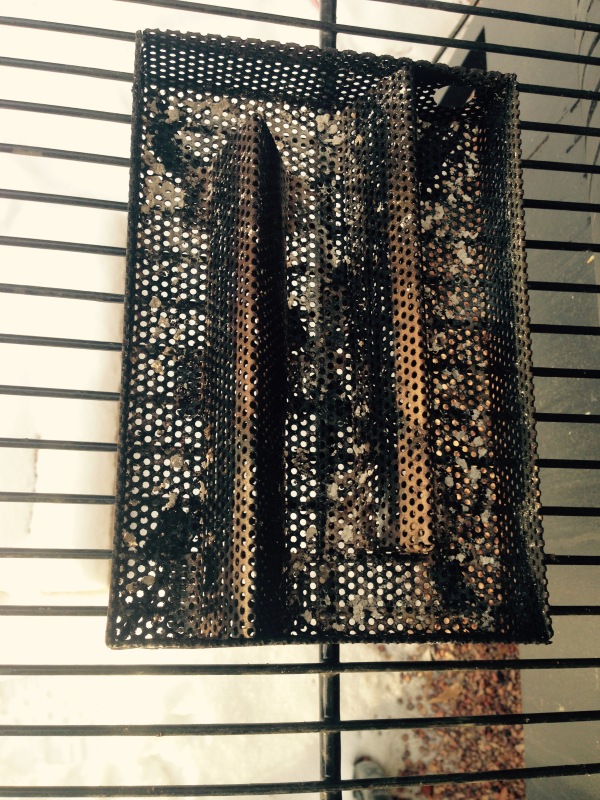 I placed the smoke generator next to the chimney, hopefully most of the heat will escape through the chimney while the smoke fills the compartment.  I also placed the thickest end of the fillet closest to the burning pellets so that hopefully the temperature incease won’t affect the salmon.

I generally do my cold smoking in my Traeger smoker instead of inside my gas grill due to the chimney.  This allows a nice flow of air across the cooking space as the heat exits the chimney.  Works excellently for cheese.

You can just make out the smoke exiting the chimney (sorry for the poor contrast).

See you in two hours my little beauty!

Well I did a 30 minute check and things are moving along smokingly!

Temperature is holding well at -6 degC inside the smoking chamber. 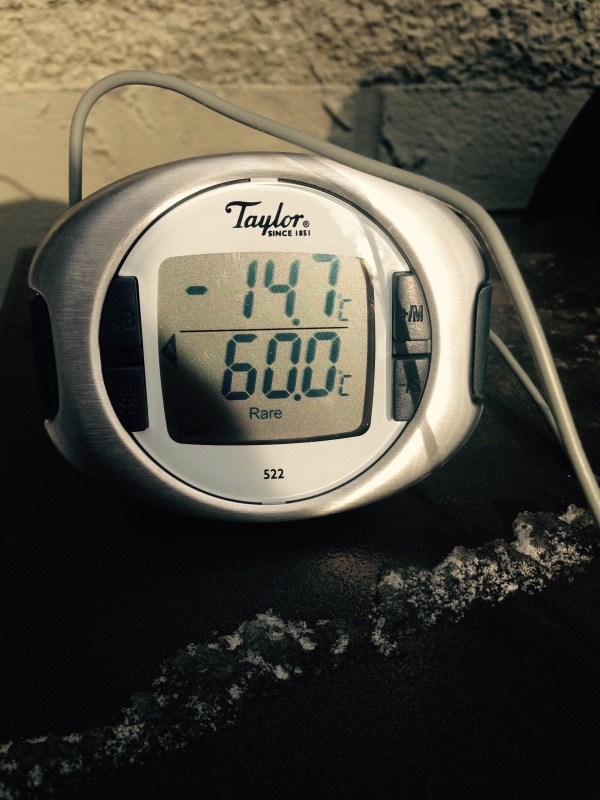 and as you can see the external temperature is also holding at -15 degC.

Well, it has been 2 hours so lets see what we have! 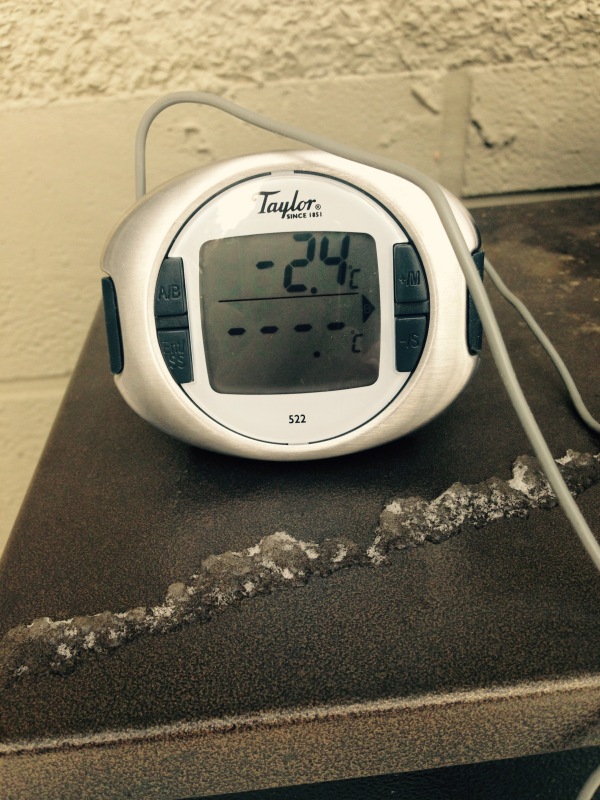 I’m really happy with that the temperature stayed nice and cold -2 degC. 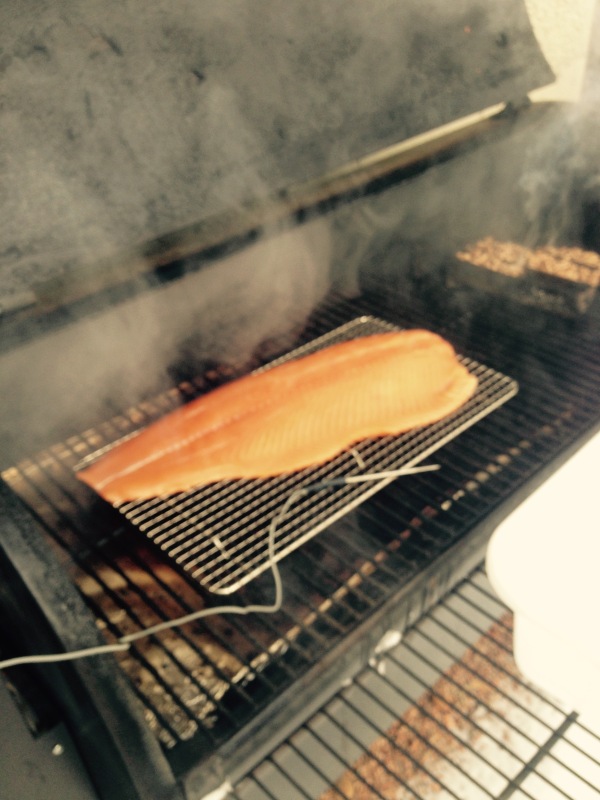 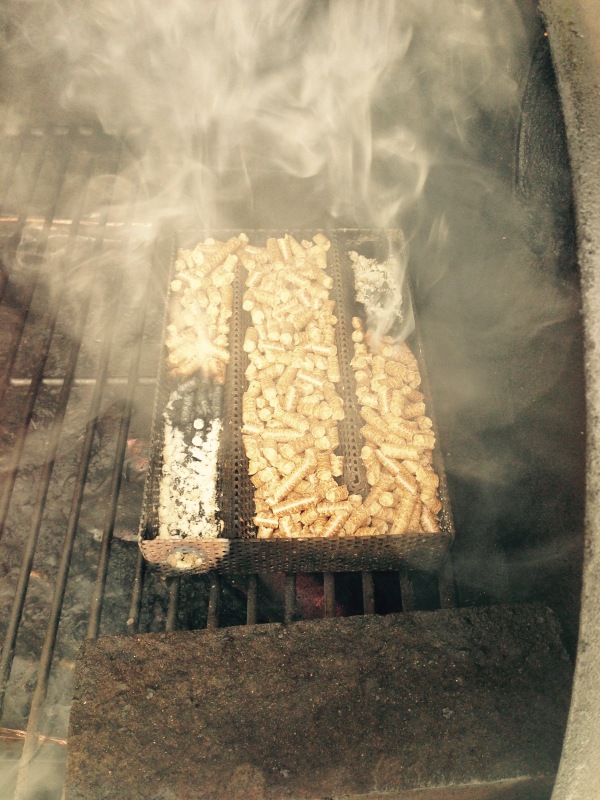 Only used about a quarter of the pellets.

Cut up and ready for vacuum packing.

We will vacuum pack and freeze most of it.  It is supposed to freeze nicely. 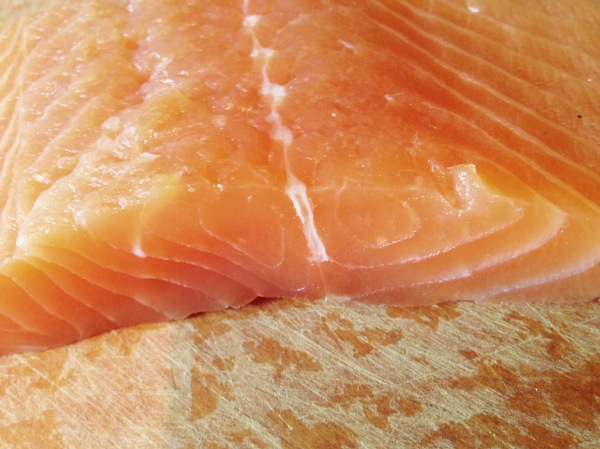 I like it served on a rye cracker with my homemade yoghurt cheese and a couple of capers.

When I first brought the salmon into the house UI was worried it was too smoky.  We thinly sliced some for lunch and the 3 of the 4 of us  at home (#4 was off on a school ski trip to BC) dug in. Everyone loved it and what I thought was a big piece soon dissappeared.  The cabin rat ate it with his fingers, as did Mrs. Sailor.  They both proclaimed it was some of the best salmon they had ever had.  I guess this recipe is a keeper! Although next time I think I will work with two fillets and smoke one and put some dill on the unsmoked one just for a change of pace. That would be a more traditional style Lox.

Good to the last bite!

Watch for future salmon smoking recipes in the near future.

Until then; eat some cheese or salmon or bbq.

These mixed media earrings are another fun collaboration between the two of us. These earrings feature two of Lorrie's handmade ceramic pieces. Rick created all of the metalwork incorporated in these earrings; the ear wires are sterling silver and the brass rings were custom handcrafted in our workshop (no factory created components). These earrings and other designs can be found at: madsquirreljewelry.com
Lorrie created these earrings that feature four of her handmade, hand painted porcelain pieces. All metalwork incorporated in these earrings is sterling silver and custom handcrafted in our workshop (we didn’t use any factory created components). Check out these and other items at
I created these sterling silver earrings featuring my partner’s handmade porcelain pieces that were hand-painted front and back. They are Delft style with a faint red back. All metalwork incorporated in these earrings is sterling silver and was handcrafted by me.
I created these earrings featuring my partner’s handmade ceramic pieces that were hand-crafted from black clay. The earwires incorporated in these earrings are brass.
Another collaboration between Lorrie @madsquirrelmudworks and Rick. These elegant earrings are made of black clay ceramics and sterling silver. They are available at @painteddooronmain or our online store at madsquirreljewelry.com
These beauties are a collaboration between Lorrie @madsquirrelmudworks who created the ceramic parts and Rick who created the metal components. The circles are brass and the ear wires are sterling silver. These beauties are available at @painteddooronmain or on our online store at MadSquirrel jewelry.com
New Mad Squirrel Earrings hot off the bench. The ceramic parts were created by Lorrie @madsquirrelmudworks and the metal parts are all sterling silver created by Rick. This lovely set are available at @painteddooronmain or our online jewelry store: madsquirreljewelry.com
Christmas is in the air and @madsquirreljewelry has created some unique solid copper Christmas ornaments. No two are identical, they have a variety of patinas on them. They are available at The Painted Door on Main in Beaumont, AB. #christmas #christmasdecor #christmastree #edmontonchristmas #beaumontchristmas #painteddooronmain #handmadechristmas #handmadechristmasornaments #handmadeedmonton #edmontonhandmade