I had a special request for homemade cheese this past week!

If I have this blogging thing sorted out this post will magically appear while Sailor girl and I are at dinner party with our wine tasting friends.  This is a noteworthy event because our single friend Hari who lives in a condo on his own is hosting!  These dinner parties have evolved over the years and I do mean years….11+ years.  It all started with 4 couples and Hari, a recent transplant to our city; and on occasion a single lady who we all hoped that chemistry would strike and we would have five couples.  But alas we are much better wine tasters and chefs than matchmakers.  One couple moved away to New York a few years ago and we’ve finally replaced them with one of the couple’s daughter and her now fiance.  We have literally watched our kids grow up at these parties.

Man I do go off on a tangent sometimes but this party is significant because Hari has finally got up the courage to be the host for a full blown dinner party.  Not only is he hosting but he is supplying all the wine, food and Ouzo.  Hari definitely has courage looking after all of this!  Hari made one request though and here we are; he asked for some homemade cheese.

This is a Greek dinner party, Greek food, wine and Ouzo. So that leads to today’s post, Halloumi!  A cheese from Cyprus that is distinctive in that it does not melt when it is cooked.

Halloumi has a long and storied history on Cyprus and was originally made using the milk of the Mouflon sheep that were introduced to the island during the Neolithic period.  These sheep were isolated from the others on the mainland for thousands of years and have developed into a distinct subspecies. Cyprus Mouflon sheep are now an endangered species. Halloumi is now made using a combination of goat, sheep and sometimes with cows milk during the winter when the sheep and goats aren’t producing milk.    The original breed from the mainland is a popular game farm hunting animal around the world.

From Wikipedia, the free encyclopedia:

Halloumi or hallumi /həˈluːmi/ (Greek: χαλλούμι; Turkish: hellim; Arabic: ḥallūm /ħalˈluːm/) is a Cypriot semi-hard, unripened brined cheese made from a mixture of goat‘s and sheep’s milk, and sometimes also cow’s milk. It has a high melting point and so can easily be fried or grilled. Halloumi is set with rennet and is unusual in that no acid or acid-producing bacterium is used in its preparation.

Halloumi is popular in Cyprus, Greece, Turkey and the Levant. It has recently become very popular in the United Kingdom.

Halloumi cheese originated in Cyprus and was initially made during the Medieval Byzantine period (AD 395 – 1191), subsequently gaining popularity throughout the Middle East region.

The cheese is white, with a distinctive layered texture, similar to mozzarella and has a salty flavour. It is stored in its natural juices with salt-water and can keep for up to a year if frozen below −18 °C (0 °F) and defrosted to +4 °C (39 °F) before sale. It is often garnished with mint to add to the taste. Traditionally, the mint leaves were used as a preservative, this practice arising from the serendipitous discovery that halloumi kept better and was fresher and more flavoursome when wrapped with mint leaves. In accordance with this tradition, many packages of halloumi contain fragments of mint leaves on the surface of the cheese.

The cheese is often used in cooking and can be fried until brown without melting, owing to its higher-than-normal melting point. This makes it an excellent cheese for frying or grilling (e.g. in saganaki) or fried and served with vegetables, or as an ingredient in salads. Cypriots like eating halloumi with watermelon in the warm months, and as halloumi and lountza – a combination of halloumi cheese and either a slice of smoked pork, or a soft lamb sausage.

The resistance to melting comes from the fresh curd being heated before being shaped and placed in brine. Traditional halloumi is a semicircular shape, about the size of a large wallet, weighing 220–270 g. The fat content is approximately 25% wet weight, 47% dry weight with about 17% protein. Its firm texture when cooked causes it to squeak on the teeth when being chewed.

Traditional halloumi is made from unpasteurised sheep and goat milk. Many people also like halloumi that has been aged; kept in its own brine, it is much drier, much stronger and much saltier. This cheese is very different from the milder halloumi that Western chefs use as an ingredient.

Halloumi is registered as a protected Cypriot product within the United States (since the 1990s) but not yet in the European Union. The delay in registering the name halloumi with the EU has been largely due to a conflict between dairy producers and sheep and goat farmers as to whether registered halloumi will contain cow’s milk or not and if so, at what ratios with sheep and goat’s milk. Most Cypriots agree that, traditionally, halloumi was made from sheep and goat milk, since there were few cows on the island until they were brought over by the British in the 20th century. But as demand grew, industrial cheese-makers began pouring more of the cheaper and more-plentiful cow’s milk into their caldrons. If it is registered as a PDO (Protected designation of origin), it would receive similar status as 600 or so other agricultural products such as feta and Parmesan cheese.

The name “halloumi” is probably derived from an Egyptian Arabic loanword from Coptic halum meaning “cheese”, and it is believed to have been eaten in ancient Egypt. In modern Egypt, hâlûmi, which is similar to Cypriot “halloumi” but is essentially a different cheese, is eaten either fresh or brined and spiced.

What makes Halloumi so delicious and unique is what happens when the cheese is cooked.  It should be cooked in a dry pan as oil will seal it.  As the cheese heats lactose or milk sugar escapes to the exterior of the cheese where it is caramelized resulting in a cheese that is both sweet and salty.

I followed Gianaclis Caldwell’s recipe in “Mastering Artisan Cheese Making” for this make. This is a relatively straight forward cheese to make although it does have a few twists!

Heat the milk to 30 degC to 34 degC and maintain this temperature until you need to increase the temperature (ok this step is unique; we just pasteurized the milk!). 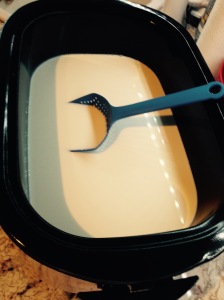 Add the culture; the culture is not used in the traditional version but will add enzymes for aging (mine will only be one week old when consumed).

Next add the Lipase (I used Kid Lipase which I hope will give the cheese a stronger more traditional flavour).

Let the curd set for about 40 minutes.

When you get a clean break cut the curd into 2-4 cm cubes and rest.

Stir gently while increasing the temperature to 38 degC – 42 degC over 20 to 30 minutes. Hold for 20 minutes while continuing to stir. Then settle.

I deviated from the recipe at this step.  you are supposed to press the curd into the bottom of the pan forming a mass, then drain the whey into another pot. Next cut the curd into quarters and press into the molds.

I couldn’t get my curds to press into a mass so I scooped them directly into the molds.

Next you hand press the curd in the molds to expel whey, you can also stack the molds for more weight.  The curd should be knit together when the whey draining is complete.

While you are pressing the cheese, heat the reserved whey to 85 degC – 91 degC, skim any milk proteins that float to the top.

Unmold the cheese and cut into 5 cm thick slices.

Place the slices into a colander or basket in the hot whey (so they don’t stick to the pot bottom).

The curds are ready when they float to the top (just like a peroghy!). 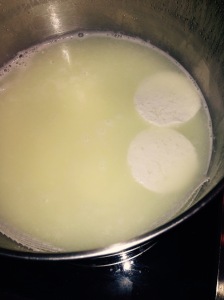 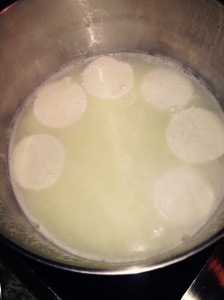 That’s Six, All Accounted For!

Spray the cheeses with cool water.  I then dried them and salted them on both sides; followed by a healthy sprinkle of dried mint leaves. 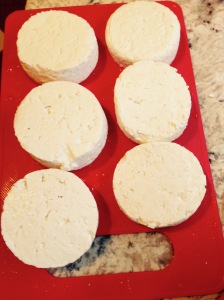 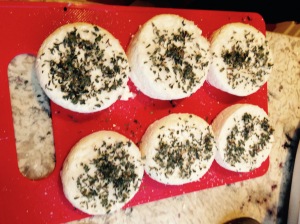 Next fold them in half making a half moon shape.

Leave cool for 2 to 3 hours

If aging pack the cheese into tubs and cover in 8 to 12 percent brine. They can be aged for months this way.

I kept mine in a cheese aging box in my cheese cave at 12 degC.  They will be consumed 7 days after they were made.

So Hari my friend!  This cheese is for you!!  Hope you liked it!

And I hope our Baptism of Father Gunther went well as well (inside joke, need to know basis only)

Join 227 other followers
These mixed media earrings are another fun collaboration between the two of us. These earrings feature two of Lorrie's handmade ceramic pieces. Rick created all of the metalwork incorporated in these earrings; the ear wires are sterling silver and the brass rings were custom handcrafted in our workshop (no factory created components). These earrings and other designs can be found at: madsquirreljewelry.com
Lorrie created these earrings that feature four of her handmade, hand painted porcelain pieces. All metalwork incorporated in these earrings is sterling silver and custom handcrafted in our workshop (we didn’t use any factory created components). Check out these and other items at
I created these sterling silver earrings featuring my partner’s handmade porcelain pieces that were hand-painted front and back. They are Delft style with a faint red back. All metalwork incorporated in these earrings is sterling silver and was handcrafted by me.
I created these earrings featuring my partner’s handmade ceramic pieces that were hand-crafted from black clay. The earwires incorporated in these earrings are brass.
Another collaboration between Lorrie @madsquirrelmudworks and Rick. These elegant earrings are made of black clay ceramics and sterling silver. They are available at @painteddooronmain or our online store at madsquirreljewelry.com
These beauties are a collaboration between Lorrie @madsquirrelmudworks who created the ceramic parts and Rick who created the metal components. The circles are brass and the ear wires are sterling silver. These beauties are available at @painteddooronmain or on our online store at MadSquirrel jewelry.com
New Mad Squirrel Earrings hot off the bench. The ceramic parts were created by Lorrie @madsquirrelmudworks and the metal parts are all sterling silver created by Rick. This lovely set are available at @painteddooronmain or our online jewelry store: madsquirreljewelry.com
Christmas is in the air and @madsquirreljewelry has created some unique solid copper Christmas ornaments. No two are identical, they have a variety of patinas on them. They are available at The Painted Door on Main in Beaumont, AB. #christmas #christmasdecor #christmastree #edmontonchristmas #beaumontchristmas #painteddooronmain #handmadechristmas #handmadechristmasornaments #handmadeedmonton #edmontonhandmade