Surprise!!!  I think this is my quickest Cheesepalooza Challenge post I have done by far.  Maybe I should have made my posting speed a New Year’s Resolution.

It was pretty much a no brainer that I would make Asiago for the challenge, as this cheese is a favourite of both my wife Lorrie and myself.  We have also eaten other cheeses that contain black peppercorns in the cheese and found these enjoyable.

For the non-Cheesepalooza’ers, Asiago was/is a cow’s milk cheese produced in northern Italy near the town of Asiago in the Veneto region. Production has been expanded and like other cheeses and copies are also made in other locations.  But true Asiago is a Denominazione di Origine Protetta or DOP protected cheese made from cows milk in specific alpine valleys.

Asiago can be enjoyed at a variety of ages and textures.  Young or fresh Asiago is smooth and fresh and is known as Asiago Pressato.  Older aged Asiago known as Asiago d’Allevo is crumbly and stronger flavoured similar to Parmesan.  A variation, Asiago Pepato has black peppercorns integrated into the curds before pressing.  On to the make.

For this challenge I used Mary Karlin’s recipe but made a few variations.  Mary’s recipe uses 6 quarts of whole milk and 2 quarts of 2% for a total cream content of 2.94%.  According to Gianaclis Caldwell, Asiago is typically made with partly skimmed milk with an average 2 to 2.8% milk fat.  I decided to go with 12 litres of 3.25% and 2 litres of 2% milk, which should give me a final cream content of 3.07%, which is a little high, but we do like cream in this family!

I once again had temperature control issues but this time I was too conservative.  It took 70 minutes to reach 104 degF instead of 40 minutes.  The curds turned out well and I got a good clean break. 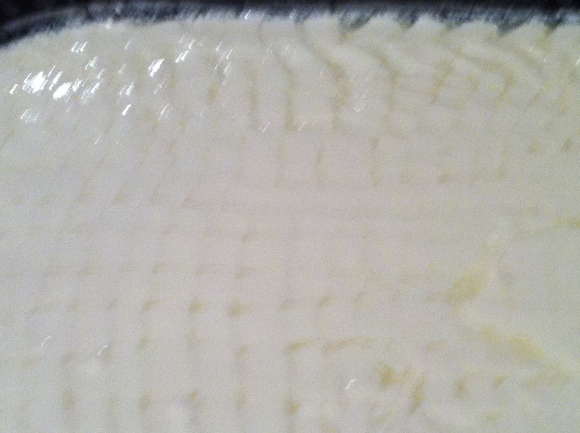 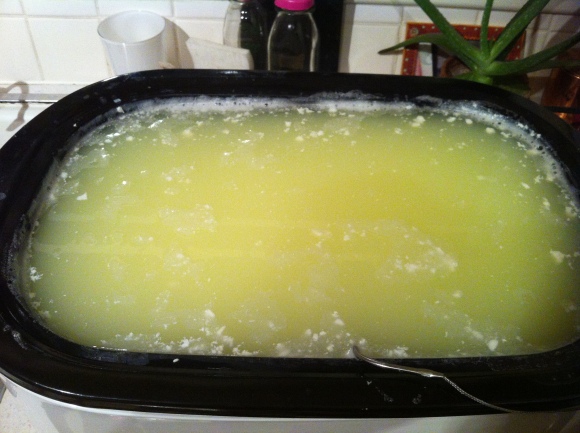 I then drained off the whey to expose the curds and placed the curds into cheesecloth lined St. Paulin/Tome mold (200 mm x 150 mm) and Reblochon molds (135 mm x 65 mm).  I filled the Reblochon mold half full and then sprinkled black peppercorns across the top. 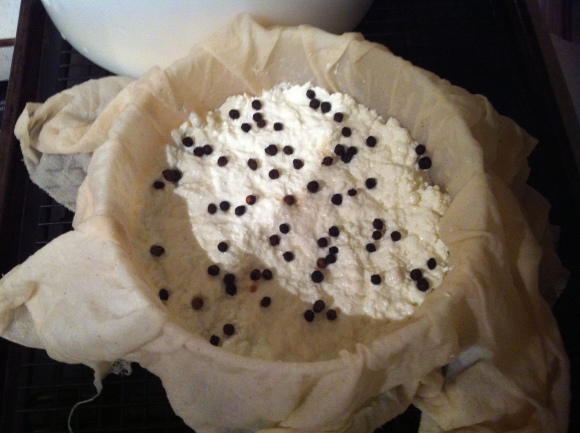 Once the mold were full I pressed them with 8 pounds for one hour and then unmolded and unwrapped them, flipped them rewrapped them and placed them back in the molds. 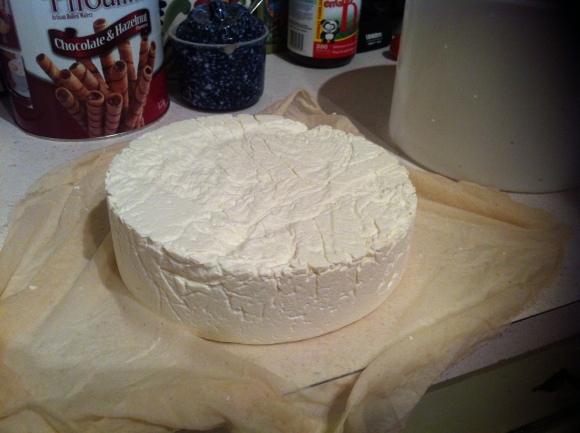 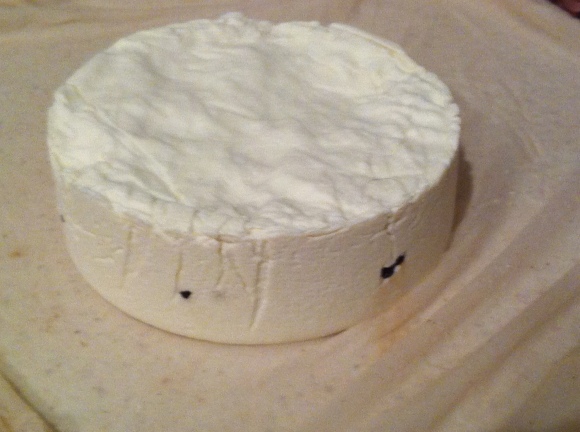 I then pressed them overnight or about 14 hrs with 8 pounds again.  Mary had suggested pressing for 8 hours. 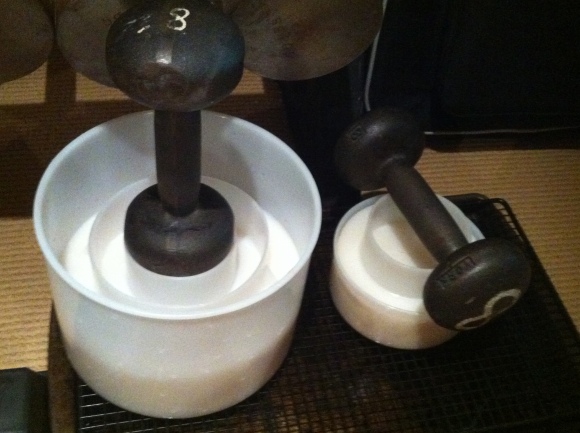 Remove the cheese from the molds and cheesecloth. 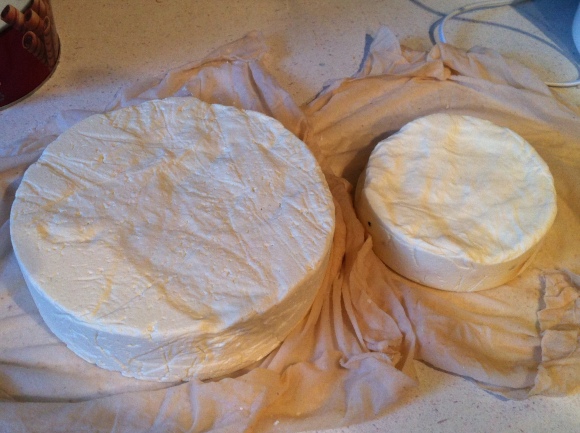 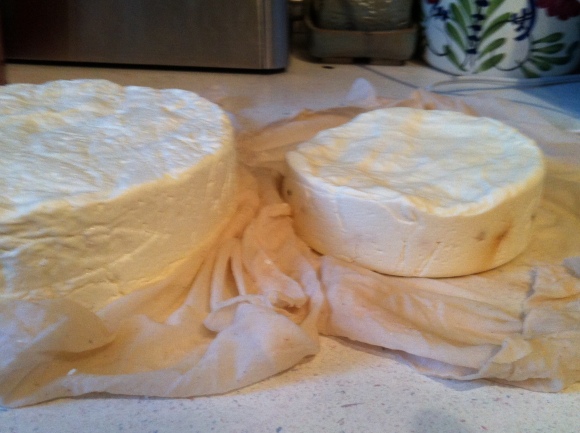 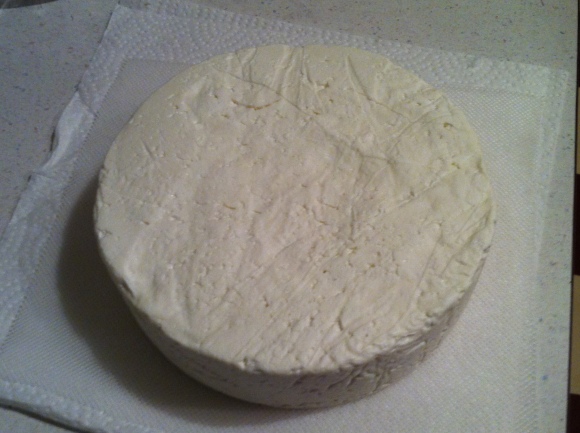 I brined the smaller wheel for the full 14.5 hours but pulled the large wheel 4 hours early, as I didn’t want to get up at 3 am.  My brine was also warmer as I didn’t have access to a 50 degF location that could hold my brine pot so I ended up brining at room temperature. 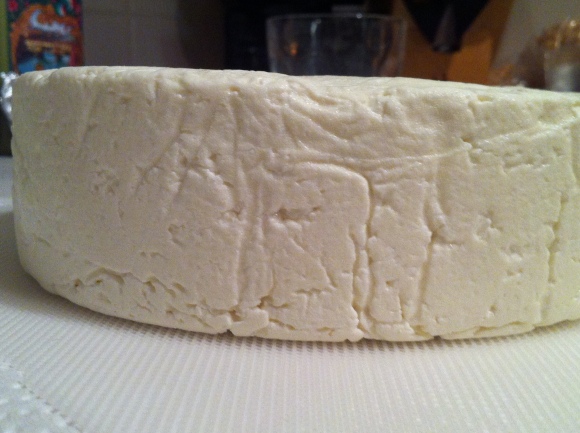 Side Profile of Large Wheel After Brining

Once brining is completed, blot the cheese dry and place in the cheese cave.  Aging can range from a few weeks for Asiago Pressato to up to a year for Asiago d’Allevo.  The smaller wheel is Asiago Pepato (added peppercorns) so I will probably sample that one first and leave the larger wheel for up to 6 months or so depending on how the cheese performs in the cave.

For this cheese make I have a couple of concerns.  I brined the cheese at room temperature; I am concerned the salt uptake will have been too quick and by leaving my cheeses brine for virtually the recommended time for 50 degF they will be overly salty even for Asiago.

My second concern is that I didn’t press with enough weight.  While the cheeses were brining (after pressing was complete) Ian tweeted to the Cheesepalooza group that the press weight is partly determined by the diameter of the cheese hoop (mold).  I increased the milk volume and used my big Tome mold with the additional curd but I pressed at the recommended weight and time for the smaller sized mold so I am concerned I may not have expelled all of the whey.

I will keep you posted when I finally break into these cheeses.

So get out there and eat some handcrafted cheese!  Your regional creamery will thank you.