Now before we get started; some of you may have memories of your ol’ Uncle Eddie the draft dodger sitting on the back porch with a cloud of herbal essence wafting around his pony tailed head or of a recent trip to British Columbia.  But this ain’t that kind of story, so take this as a warning if any of you are granola-bark-straw munching folks (GBMF).  If you are one of those GBMFers, you won’t find this pretty; although you may find it secretly appetizing.

These fatties are a carnivore’s delight.  They are a layer of ground meat of your choice, such as sausage meat, ground pork, ground beef/lamb; heck maybe even ground tofu (doubtful) that is rolled around a filling of your choice; then sometimes wrapped in a lattice of bacon and then smoked at low heat until cooked to perfection.

So, like most things I try, I jumped in with both feet and made some of each.

In my humble novice opinion Fatties are the first quadrumvirate of the Chakras you must pass on the journey to smoking-barbequing Nirvana.

To reach Nirvana you must pass through these points repeatedly;  learning with each new passing until ultimate bliss has been achieved.

Now on to today’s exploration.

Here is what I learned during my first Fatty Smoke:

1.  Don’t get the filling too close to the edge or it won’t seal.

2.  They may look pretty but they need lots of seasoning to balance out all of that meat surrounding the yummy filling.

For this ‘Exploration with Sailor Rick’ I made a total of FIVE Fatties.

Fried red cabbage and onions on ground pork with provolone and a smear of German mustard on the meat. The whole thing wrapped in a bacon lattice.

Pizza sauce, grated mozzarella, salami wrapped in Italian sausage and then wrapped in a bacon lattice.

How To Roll & Smoke Your Very Own Fatty:

2.              Carefully cut open the bag and add the toppings remembering to keep them well away from the edges.

This was a fun exploration but next time I will make only a couple; 5 was way too many even for this meat eating family. Although I did get to make many a lunch to take to work.

Well tonight was my first foray into the world of food bloggers as my crazy idea to join a group called Cheesepalooza came to fruition.

It was a fairly small gathering of YEG Cheeseophiles:

The Host – Valerie and her Mom
The Cheese Tech – Ian
The Cheese Groupie – Addie
The New Cheese – Caroline
And of course the grand formage…yours truly….Sailor Rick ….with my little Cheese Puff also known as The Admiral in tow.

I won’t even try to list all of the cheeses we sampled this evening because I didn’t take notes (big mistake) and I don’t want to inadvertently miss one.

Valerie was an awesome hostess providing numerous samples of her various cheeses and oven roasted heirloom tomatoes and her new creation … Chèvre Truffles…were they delicious! I limited myself to two, but could easily have gone primal and turned into a truffle pig rooting them out just like the real deal in the oak forests of France and Italy. It is obvious from her blogs and home and yard that Valerie is a true powerhouse when it comes to food.

It was clear from the start that Ian has both a tremendous wealth of knowledge and experience making cheese and is passionate about cheese and is very willing to share. Ian also brought several delicious cheeses and ice cream made with chèvre which was a show stopper; watch his blog for the recipe.

Addie is also passionate about cheese and has some very interesting ideas such as his hopped beer soaked goat cheese which was very interesting and delicious. The Admiral who normally doesn’t like hopped beer really enjoyed it as well. I look forward to his future creations.

Caroline brought her fresh chèvre made using buttermilk. She seasoned it with Herbes de Provence and lemon; it was a lovely combination I had never thought of using with chèvre; although that is my favourite seasoning for chicken roti.

The evening flew by and soon drew to a close.

This Cheesepalooza thing is going to be a fantastic exploration for Sailor Rick!

Got home from work and rushed into the kitchen to check on my cheese.

My fifteen year old says what’s in that pot in the oven? Reply – my cheese!

Oh I turned the oven on for 10 seconds and discovered the pot and turned it off.

I check the remote temp I have set up in the oven and it is reading 99 deg F…..agggh; another note to self…. Put note on oven telling junior chefs not to use oven while cheese creation is in progress!

The cheese had been ripening in the pot for 17 hrs and the curd was solid and pulling away from the pot edge.

I filled four molds and put the rest in cheese cloth. I will drain the molds till morning about 14 hrs and the cheese in the cheese cloth after 6 hrs.

After the success of my first attempt thought I better have some fresh chèvre for Cheesepalooza on Friday.

Made a double batch this time so we will have lots at home. Another change this time was I used my missing liquid rennet instead of tablet.

Can’t wait till tomorrow to see the results!

Scurried around looking for my cheese making supplies which were stored in a variety of places amongst my other hobby supplies. Collected everything into one pile and reviewed what I had. Compared my supplies to those in the Basic Chèvre recipe found in Mary Karlin’s excellent book “Artisan Cheese Making At Home”; the bible for this little global endeavor called Cheesepalooza.

Discovered that I didn’t have the starter Mary recommends so did some cross referencing in my other cheese books, the Glengarry Cheese website where I bought my starters and a web search. I found a recipe for “Cheese craft: how to make Pangaea’s creamy chèvre at home” which was a good fusion of what I had read.

Got the milk heating on the stove watching the temperature with my yoghurt making thermometer and as it approached 86 deg C realized the recipe called for 86 deg F…..ahhhh! First slight error; now had to wait for temp to drop to 86 deg F while making large note in cheese log book to double check temperature scales before beginning!

The rest was uneventful, placed pot in oven overnight till I got home from work, about 18 hrs later. Checked for a clean break….. Looks good to me!

I placed the curds in cheese muslin and drained in a colander overnight till I got the consistency I was looking for.

The big test was the first taste…..creamy and smooth with a nice delicate flavour….success!!

I followed Mary’s direction and wrapped most of the cheese with charred grape leaves from my garden. I will bring some for the Cheesepalooza tasting on Friday. 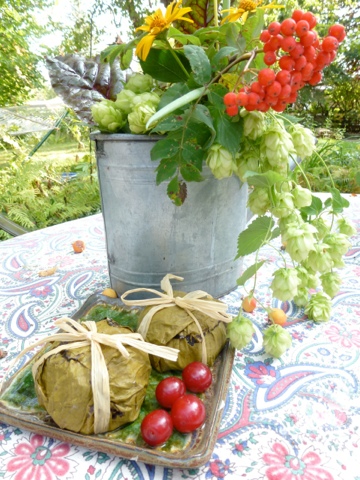 Join 227 other followers
These mixed media earrings are another fun collaboration between the two of us. These earrings feature two of Lorrie's handmade ceramic pieces. Rick created all of the metalwork incorporated in these earrings; the ear wires are sterling silver and the brass rings were custom handcrafted in our workshop (no factory created components). These earrings and other designs can be found at: madsquirreljewelry.com
Lorrie created these earrings that feature four of her handmade, hand painted porcelain pieces. All metalwork incorporated in these earrings is sterling silver and custom handcrafted in our workshop (we didn’t use any factory created components). Check out these and other items at
I created these sterling silver earrings featuring my partner’s handmade porcelain pieces that were hand-painted front and back. They are Delft style with a faint red back. All metalwork incorporated in these earrings is sterling silver and was handcrafted by me.
I created these earrings featuring my partner’s handmade ceramic pieces that were hand-crafted from black clay. The earwires incorporated in these earrings are brass.
Another collaboration between Lorrie @madsquirrelmudworks and Rick. These elegant earrings are made of black clay ceramics and sterling silver. They are available at @painteddooronmain or our online store at madsquirreljewelry.com
These beauties are a collaboration between Lorrie @madsquirrelmudworks who created the ceramic parts and Rick who created the metal components. The circles are brass and the ear wires are sterling silver. These beauties are available at @painteddooronmain or on our online store at MadSquirrel jewelry.com
New Mad Squirrel Earrings hot off the bench. The ceramic parts were created by Lorrie @madsquirrelmudworks and the metal parts are all sterling silver created by Rick. This lovely set are available at @painteddooronmain or our online jewelry store: madsquirreljewelry.com
Christmas is in the air and @madsquirreljewelry has created some unique solid copper Christmas ornaments. No two are identical, they have a variety of patinas on them. They are available at The Painted Door on Main in Beaumont, AB. #christmas #christmasdecor #christmastree #edmontonchristmas #beaumontchristmas #painteddooronmain #handmadechristmas #handmadechristmasornaments #handmadeedmonton #edmontonhandmade